Browse: Home > The history of circus

The history of circus 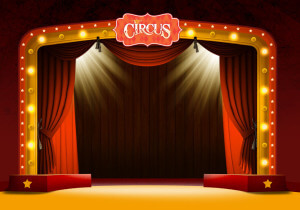 The circus arts are undoubtedly one of the most widely shared cultural treasures on this planet. Primarily developed in the West, the sources upon which they have drawn are innumerable.

A great number of techniques have origins in the Far East, but their dispersion throughout the world was very rapid: the Silk Road in particular played a determining role in the propagation of several acrobatic disciplines in Europe. Thousands of years old, tightrope walking, acrobatics, balancing, and juggling objects were to become the most prominent circus arts by the end of second half of the 18th century.

In Lambeth, a suburb of London, a demobilized cavalry officer traced a circle in the grass and dust, crystallizing influences that were at the same time aristocratic and derived from travelling acrobats. By juxtaposing trick equestrian performers and jugglers, he began to shape the foundations of a new form of spectacle. It was there, between two drum rolls and a tumbler’s diatribe, swept along by the horses’ gallop and the acrobats’ virtuosity, that the circus was born. All accomplished in a track 13 metres in diameter, covered with earth and sawdust for optimum flexibility and resiliency. The show was composed of equestrian numbers, some acrobatic performances and the first comic elements. Animals in costume would come much later, and at the end of the 19th century the circus underwent a decisive change in its performance codes.

The Modern Circus is Born
Taking refuge in the shelter of buildings of wood, stone and steel as they go, jugglers, clowns and acrobats traveled through Europe. The introduction of the circus tent in Europe at the beginning of the 20th century will give the circus independence and freedom. It became also that much more popular. The reserve until then of a certain societal elite, it now sought to conquer increasingly larger audiences. It is the time of gigantism in Germany and of boundless expansion in the United States. Beginning in the 1930s, the circus also played an important role in the development of cultural policy in the Soviet Union; the opening of the Moscow Circus School is a major event, instituting an unprecedented pedagogical and artistic vehicle for the West. It is also as decisive a development for circus arts as the emergence of exoticism 50 years earlier, or the supremacy of the big top as an essential vector of communication, at the same time an aesthetic convention and performance arena.

An Era of Renewal
At the beginning of the 1970s, the circus arts experienced a new revolution, initiated on the heels of the political and social upheaval at the close of the 1960s. In France, the United States, Australia and Scandinavia, many existing models were questioned, and the circus undergoes an extraordinary revival there. The experiments that evolve in these countries do not all hold the same importance; some will be transitory. But an alternate understanding of acrobatic moves, a new artistic significance granted to technique, will become intrinsic over two decades and contribute to the circus arts gaining a major place on the playing field of Western culture.

The most ancient techniques, revisited and transcended by several generations of creators, will acquire artistic autonomy and be put at the disposal of a global community. Today, juggling, acrobatics, clowning or the flying trapeze are regarded as essential disciplines in conceiving a potential performance. It is no longer necessarily the juxtaposition of numbers that ensures the quality of the show, but increasingly a single discipline that broadens and enlivens a creation.

Fragmented, evolving, the circus appears somewhat divided, from the point of view of its techniques and artists, and also of its audience. Multiple, changing, it lives.